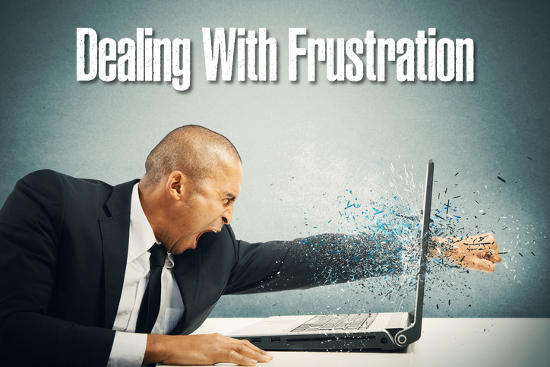 Unfortunately, frustration can be more damaging than even the trickiest opponent. Speaking as a boxing coach, I’ve seen fighters with world class talent who’ve been mentally broken during a fight all because of frustration. They simply didn’t know how to deal with it. Many become reckless and angered which typically results in careless mistakes. The result of such haphazardness can be devastating.

In summary, I highly recommend learning some new skills or drills that you won’t master overnight. Find something that will be difficult for you, and then calmly deal with the inevitable frustration that accompanies the learning curve. In doing so, you’ll become better equipped to deal with frustration in life as well as sport.

That doesn’t mean you still won’t drop the occasional f-bomb. I’m guilty as charged. It doesn’t happen as often though, and it takes much more for me to reach that point. So, the potential for an emotional response never disappears entirely, but it becomes less likely, and not as extreme. And that alone can be a game changer many athletes.

Read more about this at rosstraining.com.

Essential Details for Proper Swing Grip and the Kettlebell Halo

How I Trained for and Achieved My Sinister Goal

All-Natural Beauty Secrets from Celebrities That Are Super Affordable

How to Improve Your Mental Health with Nutrition

ABOUT US
BeautyAdvice.Info is a unique content site built to help you define your life's purpose. Our content is read by people from around the world every single month. Numerous lives have been changed, fixed or impacted through the delivery of our content. We pride ourselves in true value & authenticity of our information and hope that you will be one of them.
Contact us: social @ beautyadvice.info
FOLLOW US
© 2018 Site Name

Your password reset link appears to be invalid or expired.